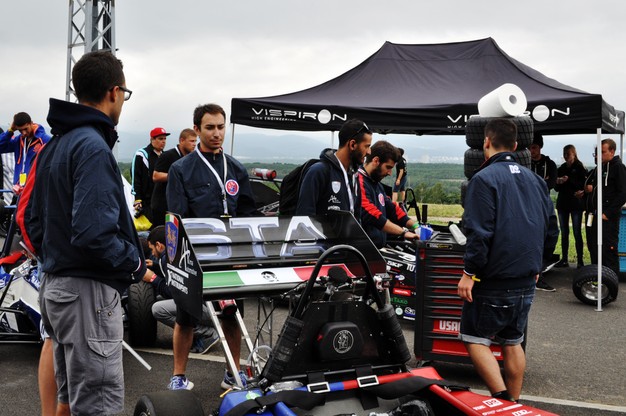 When persevering in reaching a goal, the goal is always reachable. This is what happened at UniBo Motorsport in the race week in Most, Czech Republic, From 2 to 6 August.

During the first day, scrutineering was held, checks in which compliance with the SAE regulation and vehicle safety were assessed, which were crucial for the transition to dynamic tests. The atmosphere was immediately different from the Italian experience since it was characterized by a much more convinced and stronger team than the previous experience.

The second was the day of all static tests in which we showed that we have solid preparation on both the technical and managerial side. Knowledge that was reflected in the results obtained: 11th place at the Cost report, 5th at the Design event, 7th at the Business presentation.

On Friday, however, the first three dynamic tests were performed. In the first part of the day, the Skidpad and Acceleration were held: after a first phase that went quite well, our drivers were able to bring the car to perform very well, with a 3rd place in the standings for the Acceleration.
Subsequently, the Autocross test took place, which was decisive for the positioning in the Endurance test, the last dynamic test.
During the first run, the variable weather conditions led to careful evaluations on the choice of the tyres compound and, despite the difficulties caused by the adhesion to the asphalt, a time was obtained that allowed the placement in 13th place.
The second run was conditioned by an unfortunate accident that caused the break of the left front suspension arms and the stopping of the race for the MW4-15, which however completed the lap.

The damage created led us to work hard in the night, so that we could be present at the last important phase of the race. The constant commitment and determination that often characterize us have allowed us to find a solution to the problem by guaranteeing us participation in the Endurance test.

This race overall represented a victory for the team, which in the moment of difficulty did not pull back but, with stubbornness, went all the way, also giving a good place. We reached 9th position out of 25 internal combustion teams that participated in the competition.
The only determination would not have been enough: the damage was resolved thanks to the enormous solidarity shown by the other participating teams, from the early stages.
The direct contribution of some of them was then essential. The experience in the Czech Republic has taught us something great: the true nature of Formula Student, that of a championship between students who share the same great passion for Motorsport.
This only value has served to create brotherhood and close collaboration between teams with different cultures and know-how, but with the same enthusiasm, determination and desire to learn.
We hope that the third stage will be equally fruitful!