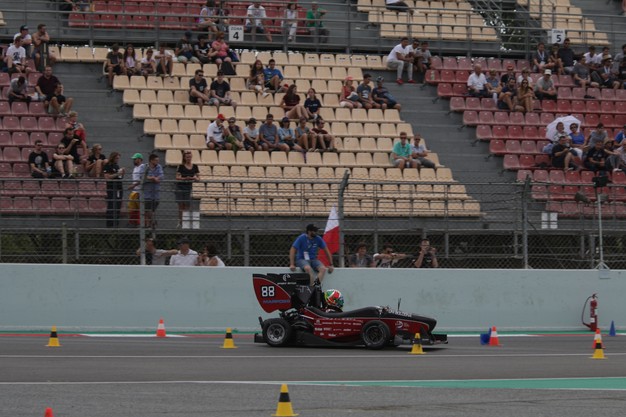 ​The season for UniBo Motorsport also ends this year, with the inevitable stage of Formula Student Spain, held from 22 to 26 August 2018 at the Circuit de Barcelona-Catalunya and which saw the participation of 79 teams (38 combustion, 39 electric and 2 driverless) from 18 countries.

After the adventure of Formula Student Germany, which ended prematurely due to the breakdown of the differential support of the Audace LC, the team had returned home convinced more than ever to get their creature back on track, despite the fact that the days were very few.
After nights of uninterrupted work in the workshop and entire days of testing, the Audace LC managed to cross the track of the Circuit de Barcelona-Catalunya again, a clear example of the team’s tenacity.

The much feared Scrutineering, which had highlighted the problem of Audace LC in Germany, did not cause complications in Spain.
After passing the Technical Inspections, it was the turn of the other static tests: a great result was the 4th place of the Cost Event, but also the 7th for the Business Plan Presentation and the 16th for the Design Event, showing a clear improvement compared to last season.

​The dynamic tests saw the return of the Audace LC to the track, winning 7th place in the Acceleration test with a time of 4.139 seconds. The other tests also performed well: the Audace LC totaled a time of 5.588 seconds for the Skid Pad and 74.934 seconds in the Autocross.
The Endurance test took place on Sunday 26 August: a few corners from the end, the car stopped due to some engine problems, unable to complete the test.