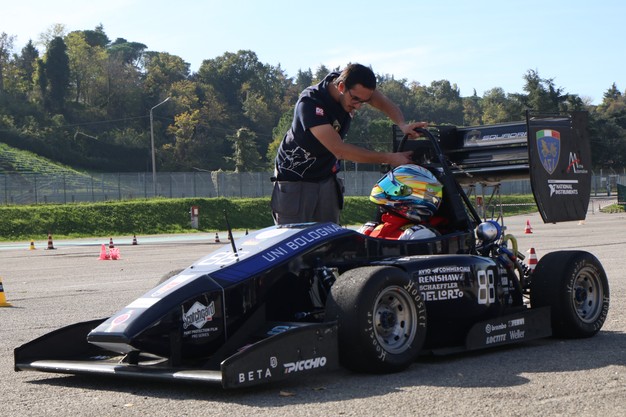 After the Motorfest 2017 and a series of indispensable drive tests carried out at the Enzo and Dino Ferrari Autodrome in Imola, the team is already working on the construction of the new single-seater car, protagonist of the upcoming season.
On the track, the focus was mainly on testing aerodynamics, the cooling and lubrication system.
The idea is to redesign the machine and all its components from scratch. Several key projects of the new model: a lighter hybrid chassis, the implementation of a new electronic control unit, a new cooling system and a new exhaust.
Thanks to the division of the work, the departments are in great turmoil: the vehicle department is engaged in the construction of the new chassis and a lighter and more functional aerodynamic package.
The electronic department is taking care of the implementation of the electronic control unit and the powertrain department is working on the new cooling, lubrication and exhaust system.

One of the outstanding features of Unibo Motorsport is team play, pursued by building a solid and winning team. The past few weeks have served to convey this philosophy to newcomers, who each year show enthusiasm to join the team. In the meantime, the pilots’ recruiting has also made it possible to identify new figures to join the team.
The partners are reconfirmed and added, evidence of the professionalism that Unibo Motorsport wants to convey. In this regard, the team is working hard on communication and on the image of the project, an essential business card for creating lasting partnerships.

The team never stops, from every point of view: despite the commitment in the workshop, there will be participation in big events.
First of all, not only in chronological order, the Motorshow, which will take place at BolognaFiere from 2 to 10 December.
Once again, we renew our thanks to the Alma Mater Studiorum – University of Bologna and, in particular, to the Magnificent Rector Francesco Ubertini for the trust placed in us.