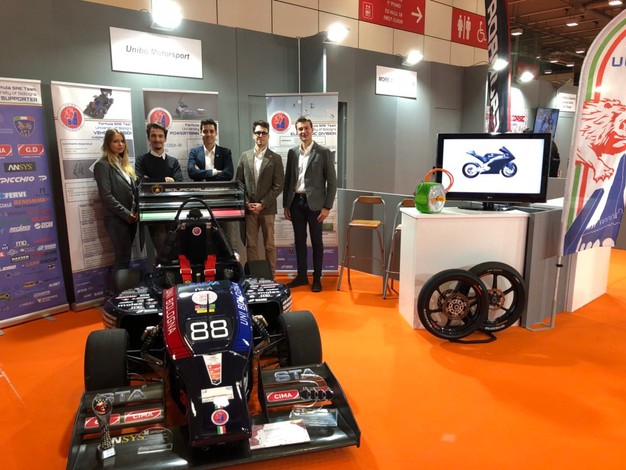 For UniBo Motorsport, the experience of the MotorShow ends again, the exhibition of cars and motorcycles that every year attracts thousands of visitors to Bologna.
In addition to the presence of car manufacturers including Lamborghini, Ferrari and Tesla, performances and competitions were held throughout the week from 2 to 10 December inside the Area 48-Motul Arena: rally, stuntman, drifting, motocross, quad and test drives engaged an enthusiastic audience.
The protagonists of this edition were history and tradition, with pieces from collections from important museums, including the Ferrari Museum, the Turin National Automobile Museum, ACI Storico and ASI, whose annual participation makes the MotorShow not only an exhibition of cars and motorcycles, but also a real journey through the history and culture of mechanics. And then tuning, track-karting, arcade: the MotorShow 2017 did not miss anything.

Many useful conferences for visitors to better approach the world of motors and many illustrious guests who have wandered around BolognaFiere, such as Giorgia Palmas, Alessandro Del Piero, Guido Meda and Paolo Andreucci.
This year the UniBo Motorsport team was present in Hall 16 stand 15. Our team members had the opportunity to answer questions from the curious and to clarify the requests of fans.
There was no shortage of families, who brought their children who were given the opportunity to enter our UBM17 Felsinea and experience the thrill of feeling like real pilots for a day.

There was no lack of opportunities to interact with other teams from all over Italy, with whom it was possible to remember the matches in the race and discuss the plans for the future. Thanks to moments like these, the MotorShow proves to be a great opportunity for personal growth and enrichment.
The centrality of university excellence has translated into a series of initiatives aimed at involving students: this is the case of Brembo’s Digital LAB – “Internet of Brakes: the innovation of braking systems”, an experimental laboratory through which to test yourself.

New this year UniBo Motorsport was the presentation of the MotoStudent project, which intrigued several visitors fascinated by the stylization of the bike launched on the monitor at the stand.
After this exciting experience, our team is ready to return to the workshop and try their hand at designing the new car prototype for the 2018 season.