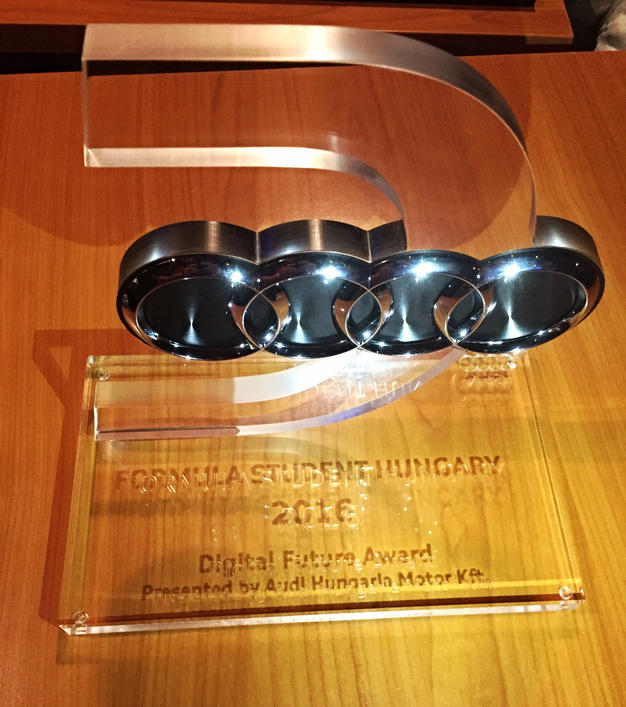 The greatest strength of a team is that which is felt at the end of a race, when one realizes that the results achieved are those given by the constant commitment and passion for reaching a common goal.

Thus it is possible to summarize the weekend of August 18-21, which saw us busy for the last appointment of the 2016 season, the Formula Student Hungary, stage of the Championship that was held in Györ and ended with the awarding of the “Digital Future Award”, delivered by Audi, to reward digital applications and where the talent and innovation of the Team for the telemetry system, the result of many years of work, has been recognized and rewarded.

The first day of competition was engaged by the Tech, the various technical inspections aimed at assessing the safety of the car and compliance with the SAE regulation which, with a negative outcome, preclude access to dynamic tests.
Some problems encountered prevented us from completing the tests on the day, which were then successfully completed on Friday morning.
On the same day the Team was involved in static tests: an appreciable result at Design, which confirms the primacy in the technical and engineering solutions adopted on the car.
Equally positive is the one in Manufacturing, Cost and Sustainability, in which the judges expressed their approval for the work done. The Business Presentation was less efficient and compared to the results obtained in the other two previous competitions.

The third day saw the development of the first three of the four dynamic tests planned: in Acceleration and Skid-Pad our riders, Marogna and Pappalardo, performed well, demonstrating the potential of the MW4-15 compared to performances of a different nature ( acceleration, curve capability).
Equally positive were the results of the Autocross, in which the degree of familiarity of our drivers with the car was visible, compared to the first two competitions.
The lap times have given a good place in the standings for this test.

Sunday was focused on Endurance, the last important dynamic test. Particularly variable weather conditions have led to careful assessments of the choice of compound by the organizers who, shortly before our car was launched, made the mandatory use of wet tires on the track.

Our first driver, Chini, then drove the entire first part of the test in quite challenging conditions, with a dry asphalt just a few minutes after the end of the rain.
The considerable change in the track conditions has therefore led to a new official communication of the judges and, for us, to proceed with the change of dry tires during the driver change.
Nalon, our second driver at Endurance, immediately acquired a remarkable pace, proceeding with lap times close to those of the top teams in the standings.
An unfortunate problem during the last part has drastically changed the outcome of the test: the judges were forced to disqualify us and decree a “Did Not Finish” (DNF) just 9 laps from the end.

​With the Hungarian stage we also mark the end of this sporting season, bringing new goals to the results previously achieved: the pride of having taken part in three different Formula SAE Championship competitions with a car, the MW4-15, fruit of the arduous commitment of the last two years, demonstrating to proceed on the track with performances very close to those of the first teams with which we competed in these competitions.
The delivery of two important awards in different competition contexts (Italy and Hungary), aimed at reiterating the uniqueness and technical quality of the Team’s work.
The achievement of remarkable results in the static tests carried out a sign of the potential brought into the race and the improvement achieved this season.

The 2016 season also concludes with the pride of having created a solid team of guys with many potentials and who have individually contributed to achieving the results of these competitions, finally proving to be cohesive even in the face of the most unlikely difficulties.
The experience of these races would not have materialized without the precious fundamental contribution of our supporters, the different companies that, in a significant way, provided us with the necessary support to complete the new car and bring it to the race, sharing our own enthusiasm for the objectives set.
A special thanks and recognition goes to the Alma Mater Studiorum, University of Bologna, which supports the project from an economic point of view and which has always guaranteed its students a solid theoretical preparation and an important know-how, which they have allowed to stand out in multiple contexts.

This is the starting point for the 2017 season, which will allow new students, with similar aspirations, to pursue a common goal, sharing the emotions that the experience in Formula SAE gives to those taking part.