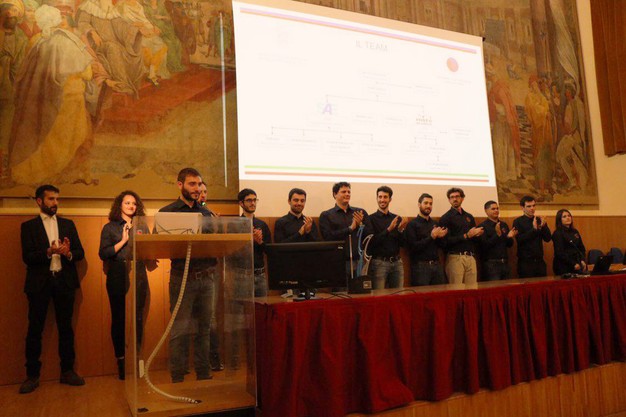 Another season ends for UniBo Motorsport, the Racing Team of the University of Bologna, engaged in the annual Motorfest appointment in the presence of representatives of the Academic Institutions and the numerous partner companies of the project.
In the Giorgio Prodi Hall, inside the Department of History, Culture and Civilization in San Giovanni in Monte, there were many guests of honor, starting with the Magnificent Rector of the University of Bologna, Francesco Ubertini, who reiterated the importance of an annual appointment like the Motorfest, which marks the passage of the baton from one generation of managers to the next: “The project contains the essential elements of the strategy that you want to carry on with the university program consisting of three elements: first the innovation and the search for new frontier solutions; the second is collaboration, synergy with the world outside the University and with businesses and the territory, fundamental actors that are part of an ecosystem and within which they move synchronously; third element the students themselves in a vision of education and training path that must increasingly combine traditional teaching with more practical teaching, which allows you to put your hand to field activities”.

As a sign of gratitude and esteem, the Ambassador of the Pier Luigi Santi project delivered some plaques of recognition to the representatives of the main partners of UniBo Motorsport, including Luciano De Oto of Lamborghini, Pierluigi Zampieri of Ducati, Francesco Possati of Marposs, Silvia Sacchetti of People Design – Mind, Ing. Strazzari of Engines Engineering, Eder Tedeschi of STA and on behalf of Zare Alberto Tambini, member of the team.
The partnership with companies of this caliber represents one of the greatest prides for UniBo Motorsport, made up of students eager to learn and apply.
The Motorfest appointment is a special occasion to tell the results achieved during the season and outline the aspirations for the future.

During the event, Pierluigi Zampieri, Ducati’s Vehicle Innovation Manager, spoke about the emotion in seeing all the students who put effort and passion into the project, involving Ducati engineers themselves and working as a real professional team, respecting deadlines and roles, even in times that were difficult during the dispute of the same race.
Luciano De Oto, Lamborghini’s Head of Compositesand Lightweight structures Development reiterated the importance of “getting his hands dirty” and of realizing concrete projects while at university: “Motorsport is a gym for training in the world of work, a training path that is implemented within companies “.

In conclusion, the usual handover took place which saw the installation of the new Formula SAE and MotoStudent managers who will undertake the management of the different departments of the team for the new season. Many plans for the future: Formula SAE is preparing to enhance the prototype made last season, the Audace LC, while the bike, after third place Overall Electric in Aragon, will have to wait until 2020 for the sixth edition of the MotoStudent and will take advantage of this year to study and work on their Alpha Leonis.