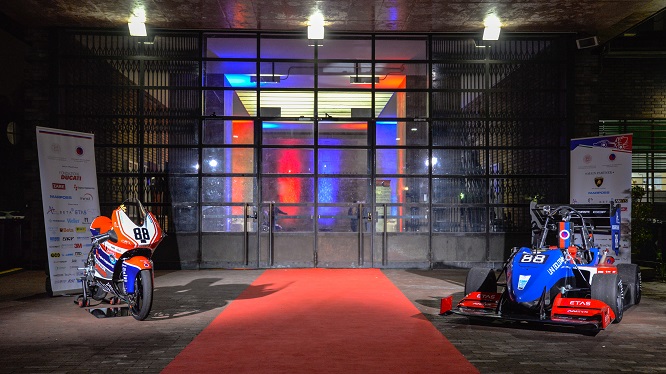 2019 was a particularly significant year for UniBo Motorsport: the Alma Mater Studiorum University of Bologna team celebrated its tenth anniversary in history.

On July 10, at the MUDETEC, the Lamborghini Technology Museum, the UBM19 Evoluta was presented, the prototype that participated in the summer races on the circuits of Varano de ’Melegari, Hockhenheim and Most.

UniBo Motorsport has created for 2019 a completely renewed car that took part in Formula SAE Italy where it conquered the fifth place in the Cost Event and in the Skidpad, in Formula Student Germany, where it obtained the tenth place in Acceleration, and in Formula Student Czech Republic.
During the latter competition, held at the Autodrome of Most, the team of the University of Bologna concluded the season with an excellent fourth overall position, obtained thanks to the first position in the Business Plan Presentation, the third in the Cost Event and the fourth in the Endurance Test.

UniBo Motorsport’s 2019 officially closed on November 28 with the usual presentation of the new team that will lead the team in the coming season, enriched by the celebrations for the tenth anniversary.
2020, on the other hand, will see the debut of a third vehicle since, next to the heir of the Alpha Leonis and the new combustion engine, an electric car will hit the track for the first time.

What awaits us is a year full of events, which we hope to face in the best way thanks to the support of our partners: the sponsors who accompany us at each track event on our liveries constitute a fundamental support for the achievement of our objectives for 2020.