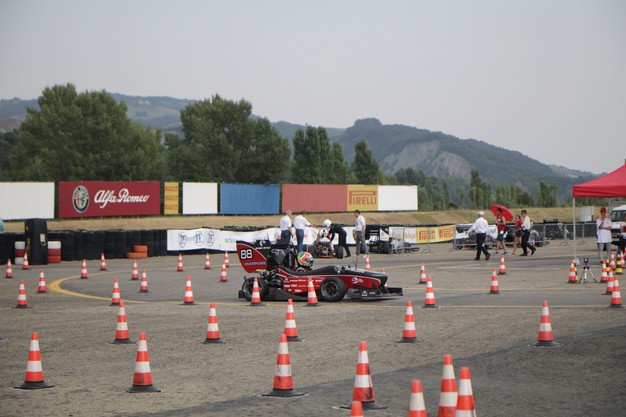 The Formula SAE Italy 2018, the inevitable stage of our team’s summer races, has now ended at the 14th season in Varano de ’Melegari.
From 11 to 15 July, the Riccardo Paletti circuit hosted around 2600 students and 84 teams, including 14 Italians, who challenged each other in the usual static and dynamic tests of the competition. In addition to being an opportunity to reap what was sown during the year, the race represents a precious moment of sharing and comparison with colleagues from all over the world.
“Here who wins, wins. Who loses, on the other hand, learns” said in an interview Carlo Giorgioni, head of cost judges. And this is precisely the objective of the Formula SAE project, in which students are called to implement the own theoretical knowledge in the design and construction of a single-seater.

Formula SAE Italy does not only concern combustion cars, but also electric and driverless cars, with 6 teams engaged in the latter. For the 2018 season, UniBo Motorsport has put on track a completely renewed car, the Audace LC, with a composite monocoque and a new control unit.
Giampaolo Dallara greeted the participants on the occasion of the opening ceremony, followed by the speech by Gianmaria Gabbiani, driver and testimonial of Bosch.
During the event, moreover, the students had the opportunity to attend the performance of the parking lot of a driverless car organized by FCA.

Between the first and second day of the race, the team brilliantly passed the techs, that is the preliminary technical inspections necessary to access the subsequent tests. The Audace LC was in good standing from a technical point of view, as well as as regards the safety of the drivers’ suits and their ability to get out of the car in the 5 seconds required by the regulation in case of danger.
The following days saw the team members engaged in the three static tests, namely Cost, Design and Business events; in the first, the judges focused in particular on the second part of the test, that is the Real case, deepening the feasibility of the Suspension System.

The results saw the team rank 14th for Design, 15th place for Cost and 17th place for Business, collecting one of the best results in the team’s history regarding static events.
Saturday was dedicated to dynamic tests, namely Acceleration, Skidpad and Autocross, aimed at testing the car’s capabilities on the track. The drivers had to accelerate the Audace in a 75-meter straight, drive it inside an 8-shaped track to test the ability to steer and drive it on a route at a speed between 30 and 40 km / h. The last dynamic test was Endurance & Efficienty, which saw the team position in tenth place, the second team among the Italians after the Dynamis PRC in Milan.

“I want to thank you because your enthusiasm allows me to return young every year” said Dallara in the final award ceremony and we at UniBo Motorsport are convinced that passion is the engine of everything.